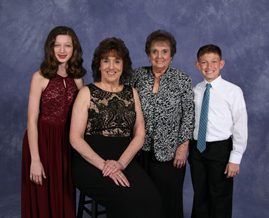 Dance is a way of life and has been for the Labourdette School of Dance since established in 1953. This season begins the 68th year of devotion to building a school of excellence and dedication to the idea of quality in dance education.

The School offers a complete dance curriculum ranging in courses for the pre-school student through adults. The Labourdettes have built a reputation as dance educators and choreographers and their primary interest is to make dance an educational part of the lives of each student by offering the ultimate training of dance technique.

Individual and personal attention is given to each student’s ability and progress by experienced and professional teachers. All classes are taught by qualified staff.

Our dance studio is centrally located in Metairie off Causeway Blvd.

“Pirates Of The Caribbean” – Gold Award and Winner of the Special Judges Choice of the Day Award.

Former Graduates of the Labourdette School of Dance, who have gone on to be successful in the Art of Dance:

Jessica Hartman Lacayo, Labourdette School of Dance, Graduate 1994, her theatre credits include My Fair Lady, Oklahoma, Camelot and Beauty and the Beast.  She was Assistant Choreographer, Dance Captain and performed in the Broadway Musical “The Boy From Oz”.  She is the Director of “Broadway Theatre Connection” holding a workshop in New Orleans this summer for the eight year. She is starring in the musical Oklahoma in Washington D.C. and is Associate Choreographer for the Off Broadway Play “Lysistrata Jones”, which opened on Broadway on December 14, 2011.

Amanda Wright Lou, Labourdette School of Dance, Graduate 1995, is a Certified Pilate’s Instructor at her studio in Mandeville, Louisiana.